You are here: Home / Ministry / How to Keep Politics out of Church

Many pastors today maintain that they have the right to be political from the pulpit, claiming that it is freedom of speech. However, the law says any 501(c)(3) organization cannot take part in, or intervene in … any political campaign on behalf of (or in opposition to) any candidate for public office. Of course, the IRS will not forbid that freedom but will revoke a church’s tax-exempt status. Although churches do have the 1st Amendment right to freedom of speech, Congress does have the freedom to grant or deny tax-exempt status and can use it as leverage to keep churches from political involvement.[1] 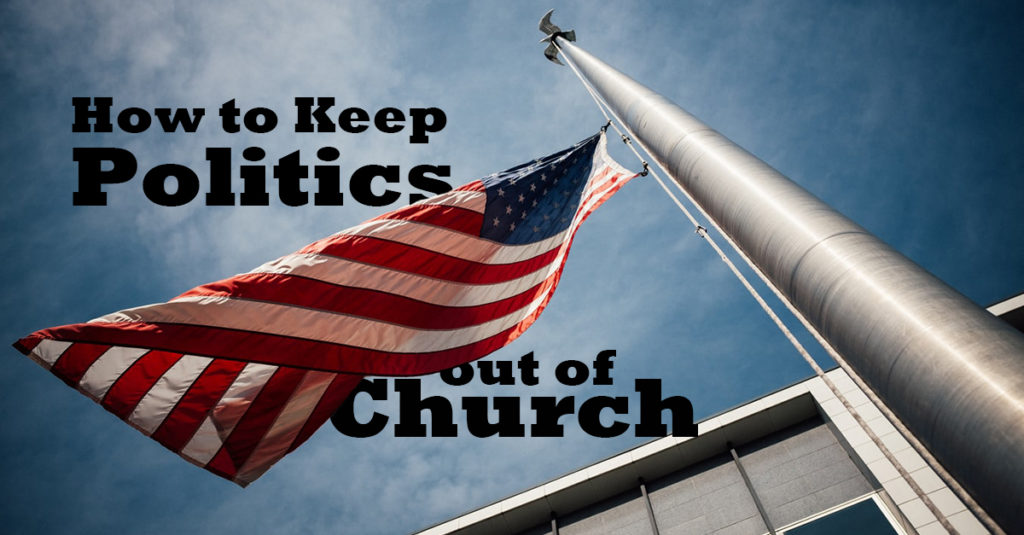 Each church takes on a character of its own. After all, it is a living organism. Every character alive has an opinion about issues. There are plenty of issues that contrast the opinions of others. The church should have all of its opinions tied to the word of God so that, as His ambassador on this earth, it expresses the opinions of God. God has an opinion about everything, including issues that humans categorize as political. This does not mean that a church should be rooted in politics. On the contrary. God told the people who make up the church to go into all the world and preach the gospel (Mark 16:15). He did not mandate that the church should impose political behaviors upon society.

Why to Keep Politics out of Church

When a person gets saved, they begin the long journey of being transformed into His image (Rom. 12:2). The political image that Jesus has for the believer is a Theocracy. He is a King and we are His subjects. Where that offends political persuasions cannot be helped. The church should be involved in this type of government.[2] However, when the church makes any issue that is NOT in alignment with Gods a political issue, it should not be involved in them. Why? Because the government may snatch away your tax-free status? NO! Because it goes against God’s character and command for the church.

When should your church have a contemporary political message that is not God’s? I heard of a preacher that said, “What if there were unsaved people sitting in that church that morning and they happened to be Democrats? How would they have reacted to what that preacher said? They won’t listen to a thing he said about Jesus because they were so upset at what he said about their political persuasion.” He added, “That’s why a preacher has no business bringing politics into the pulpit.”[3] He was talking about the politics of man; politics that had not biblical foundation enveloping the message of salvation the church is commanded to accomplish.

The correct way for any church to have a political ideal advanced is through the vehicle of salvation. When people get saved, they have a new vision of the world (Acts 26:18). Their likes and dislikes begin lining up with Gods as they study His word and grow.[4] This includes their politics as well. For example: Where the Bible says, “…if any would not work, neither should he eat.” (2 Thess. 3:10, 12), a person’s view of welfare changes a little. So, the more the church focuses on leading people to the Lord, the more people will have their beliefs altered politically as well.

How to Keep Politics out of Church

In a practical sense, to keep politics out of the church can be accomplished as follows: