You are here: Home / Sermons / The Angelic Message: A Christmas Sermon and Workbook

1. Preparation of the Message

Luke 2:8-10 And there were in the same country shepherds abiding in the field, keeping watch over their flock by night. And, lo, the angel of the Lord came upon them, and the glory of the Lord shone round about them: and they were sore afraid. And the angel said unto them, Fear not: for, behold, I bring you good tidings of great joy, which shall be to all people. 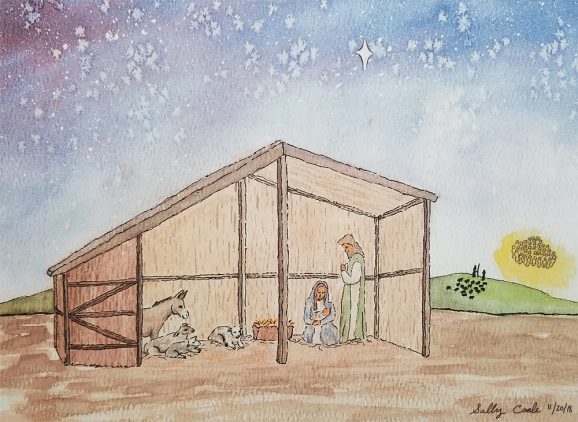 God had waited until the perfect moment for His son to born amongst men. He had already told of the place and the method, but the timing was something He had not shared. But now it was time and He would not allow His son, the King of Kings, to enter this world unannounced. He assembled all the host of heaven to proclaim Jesus, but a proclamation is useless without someone to hear it. So, God chose the shepherds who were tending their sheep at night.

We know that shepherds have a special place in the heart of God. About Himself He says, “I am the good shepherd…” (John 10:11, 14). The shepherds that night were in the fields keeping WATCH over their flocks. In Bethlehem, the people were warm, fed and safe. The shepherds were not. They were vigilant, watching out for the safety of their flock so that they would not lose even one to a predator. They were prepared.

Like sheep in the fields, there are people today who are being stalked by a predator. Predators come in every size and shape. They seek to consume people before they can become part of a flock with a shepherd to watch over them. What people need is a shepherd.

The Message Was Preceded By Promise

God has not left man to his own devices. He loves man and gave him prophecies that He would send a messiah. The first of these is in the Garden of Eden. He warned that the Messiah would be bruised but, in turn, the Messiah would crush the Devil’s head.

Then God uses the prophet Isaiah to reveal that Jesus Christ will come to the human race as a baby. He will grow to establish His government and rule the world, and everything in it. Through the prophet Micah God even tells us where His Son will be born—in the town of Bethlehem. The Scribes knew that Bethlehem was the prophesied birthplace of the Messiah.

The Message Was Provided By Preparation

God always has a plan. He doesn’t do things in a chaotic, reactive manner. He is dedicated in His plan and is always prepared before He begins to reveal it. His plan for the entrance for His son to the world of men was to be born of a virgin who would care for Him like a loving and kind mother does. There is no love like a mother’s love. The best protection for any baby is their mother. God wanted Jesus to be protected and raised with the love of a mother, so, He prepared Mary to be that mother.

The Message Was Proven By Proclamation

People like to retain a little doubt in the back of their minds. However, when things happen like they were prophesied, doubt is expelled. Therefore, people are so awestruck when some miracle takes place. Amazement at the fulfillment of a prophecy proves there was doubting to begin with, otherwise there would be no amazement. It would be common.

This was not a common occurrence. Isaiah’s prophecy was fulfilled just like it had been given. The fulfillment of his prophecy became the proof that God had indeed sent His son. On their way to Bethlehem Mary and Joseph must have remembered the prophesy that Micah told about Bethlehem. There must have been many conversations about what God was doing in their situation. Imagine the excitement about what the next day would contain as it unfolded.

Can you imagine God allowing His son to be born in a barn? Barns are dirty, smelly places where there are animals and vermin. They are certainly not a place for a baby to be born. This shows us that God can reach us anywhere we are in life: on top of the mountain or in the dirtiest barn at the lowest of any valley.

The birth of Jesus was not just a Jewish thing, nor was it just for all of man. It was a “universal” event with “universal” significance. It was even significant to the heavenly host. We know it to be true because God put a whole new star in the heavens to mark the event forever. If the proof of Jesus’ birth is enough to cause the whole world to celebrate it, then it should be proof enough that God can save you from your sins and give you eternal life.

2. Giving of the Message

Luke 2:11-12 For unto you is born this day in the city of David a Saviour, which is Christ the Lord. And this shall be a sign unto you; Ye shall find the babe wrapped in swaddling clothes, lying in a manger.

The Baby Wrapped in Swaddling Clothes

It is important to swaddle a newborn baby. Obviously, it keeps them warm, but it also helps them to feel secure and peaceful. It keeps a baby from turning over and possibly suffocating themselves. When Mary had baby Jesus swaddled, it showed that they knew what they were doing; it showed that they cared. It was an obviously good choice that God had made to have Mary and Joseph raise His child.

The Baby Lying in a Manger

A manger is a type of crib in which fodder is put for the animals to eat. It can be a sloppy, dirty place. It is too bad that there was no place at the inn for Mary to bear Jesus. It seems sad that the only place available to Jesus was a manger. Likewise, today the world has no place for Jesus. They have no time for Him to interrupt their very busy schedules of self-satisfaction. For all they care, Jesus can just go out to the barn with all the rest of the service animals. It is proof that people just call on Jesus when they need Him to get them out of some jam. Otherwise, they keep Him at arm’s length.

3. Validation of the Message

Luke 2:13-14 And suddenly there was with the angel a multitude of the heavenly host praising God, and saying, Glory to God in the highest, and on earth peace, good will toward men.

Other places in the Bible, when God wanted to send a message, He just sent one messenger. Here, the message was so powerful and important that He sent a “…multitude of the heavenly host…” He wanted everyone throughout the whole world to hear the message. Even though it may be deduced that it was not that important of a message because only the shepherds responded to it, it was not for the shepherds alone. It was for the entire world, God recorded it in the Bible for all men throughout history to hear.

Although man can hear or read the message given that night, it was not directed at man. It was a message of praise directed towards God Himself. Man is full of himself and his constantly praising himself. He feels slighted if he does not receive recognition over others when he feels he deserves it. He gets his “jaw out of joint” when people tell stories of how much they have accomplished. Then he cannot resist giving his list of accomplishments to “one-up” the other.

In heaven there is no need to pray for peace. It is on this turmoil filled world that we need peace. The world is full of chaos, turmoil and strife. It has been since the expulsion from the garden of Eden. So much so that God sent a worldwide flood in order to bring peace back into the world.

The message needed to include good will toward man because mankind has turned their backs on God. They have by not making place for Jesus amongst themselves. They have by not having anything to do with Him even today, and not accepting His gift of salvation. The heavenly host knew that man was going to need some good will for all the things he has done to slight his Creator.

“The Angelic Message” is a sermon prepared by Pastor Ron Coale. Feel free to use this sermon for your Christmas service. We have provided an outline of this sermon and an accompanying workbook in Word and PDF formats.